The gorgeous bouquet unique to Ginjo and a smooth finish 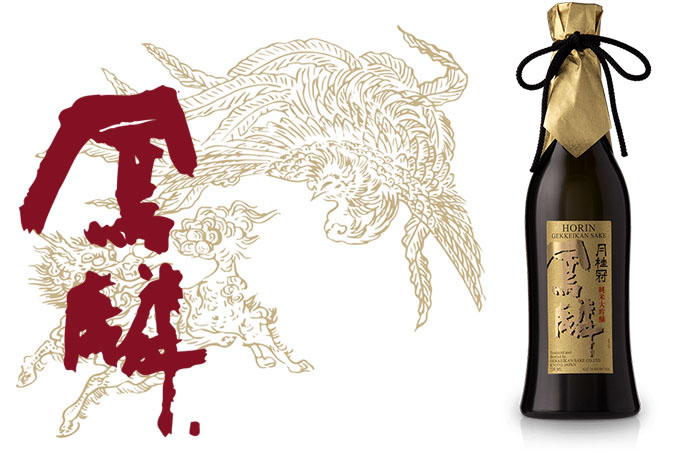 Our Horin sake brand comes from a combination of the mythological sacred bird and the Kylin. Starting in the 1900s, high-quality sake shipped to the Tokyo region was labeled “Horin Masamune.” In 1978, our highest-class Junmai Daiginjo sake started to be sold under the name “Horin Gekkeikan,” a name it retains today. Sold in black bottles with sinuous curves reminiscent of a woman, the gilded label shows “Horin” (鳳麟) written in calligraphy

Horin Masamune shipped to the Tokyo region. This is the metal mold used to imprint the sake brand onto the wooden box.

Yamadanishiki and Gohyakumangoku rice, both shuzo kotekimai (rice suitable for brewing sake), are milled to 50% for use. Yamadanishiki has large grains, with the nucleus of the rice grain, known as the “shinpaku,” is not translucent, but appears moist, with the starch packed coarsely. This means that it is easy to create tsukihaze-type koji mold that reaches deep into the steamed rice grains, allowing a good balance of rice starch and protein breakdown. Gohyakumangoku makes a mellow, relatively light sake, and, like Yamadanishiki, is considered suitable for Daiginjo and Ginjo sakes.

Normally, sake is fermented for about twenty days, but Horin Junmai Daiginjo is fermented for about 30 days to mature the “moromi” main mash. This fermentation is done at low temperatures, between 43°F and 52°F (6℃ and 11℃). Fermenting the yeast that transforms the glucose into alcohol at extremely low temperatures over a long time will gently bring out the bouquet and flavor of the sake.

Fall in 1999, at the Austrian Embassy in Japan, representatives of twelve sake brewers put their heads together. At the workshops of Riedel, a wine glass manufacturer from Austria with 250 years of history, glasses suited for the brilliant bouquet of Daiginjo sake were carefully selected. From Gekkeikan, Yasuhisa Abe, former Vice President and then the Director of Production (the highest officer responsible for sake production), was part of the final selection process, taking along samples of Horin Junmai Daiginjo. Riedel's “Vinum Daiginjo,” released in 2000, is large yet extremely thin, with a gentle swelling at the bottom. Pouring in a Daiginjo sake and swirling it around, making it dance gently, releases the unique aroma of a Daiginjo, likened to apples, bananas, or pears, concentrating it most towards the opening, which is slightly inwards. The case design reflects the labels of the Daiginjo sakes from the twelve brewers who participated in the final selection.

In 2004, Riedel also released their revolutionary Daiginjo glass in the O Wine Tumbler series, which also goes well with traditional Japanese meals, having no stem or base. The company is devoting itself to the pursuit of glasses that suit both individual drinks and how they are drunk.